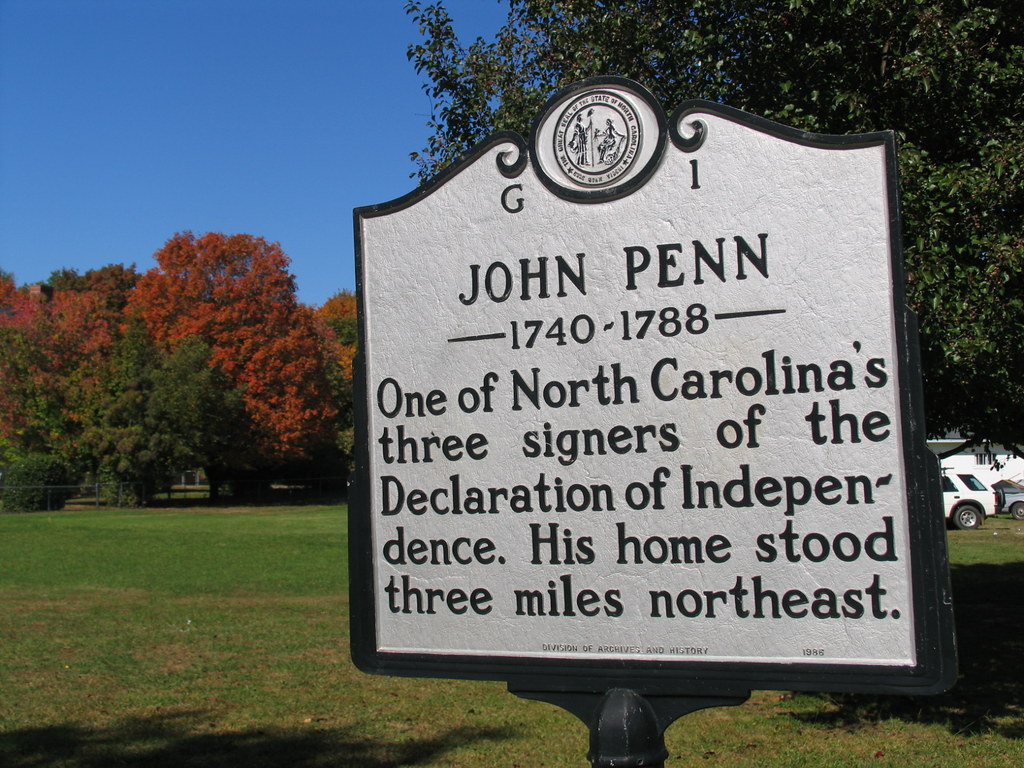 On September 14, 1788, John Penn died in Granville County at age 47. With nothing more than a very basic education, Penn rose through legal and political circles to become one of three North Carolinians who signed the Declaration of Independence.

Born in 1741 in Virginia, Penn received instruction in rural schoolhouses. After his father’s death, a neighbor offered young Penn use of his library. Through self-instruction, Penn acquired knowledge of the law sufficient for admittance to the bar in 1762.

In 1774, Penn and his family settled in what is now Vance County, a center of the colony’s growing independence movement. Penn served in the Continental Congress in Philadelphia in 1775 and soon earned the respect of constituents and colleagues.

In the summer of 1776, he joined North Carolinians William Hooper and Joseph Hewes in signing the Declaration of Independence.

Later in his career, Penn served on North Carolina’s Board of War, established by Governor Abner Nash, and on an advisory council to Governor Thomas Burke. He retired to his home near Stovall, where he was buried. In 1894, Penn’s remains were transferred to what would become Guilford Courthouse National Military Park in Greensboro.

McPhaul’s Mill was located on Little Raft Swamp near modern Antioch in Hoke County. Fanning arrived at the mill in late August. He received word that Loyalists under Colonel Hector McNeill were nearby, pursued by Wade’s Patriot force. The two Tory commanders agreed to cooperate to trap Wade. They met at Bettis’ Bridge on the morning of September 1. The exact site of the bridge is unknown.

Wade’s camp was on a hill between Drowning Creek and Little Raft Swamp. Although badly outnumbered, Fanning decided to attack.

McNeill would block Wade’s escape across Bettis’ Bridge. Fanning’s presence was given away when one of his men accidentally discharged his firearm. Wade’s men quickly organized and opened fire. Wade withdrew after a fight of nearly two hours. As McNeill posted only a small force at the bridge, Wade’s men were able to escape.

Afterwards, Fanning left McNeill and moved to the Deep River, setting the stage for his raid on Hillsborough and capture of Governor Thomas Burke on September 12.

On August 31, 1823, former governor Jesse Franklin died at his home in Surry County. He was 63-years-old.

Born in 1760 in Orange County, Virginia, Franklin moved to North Carolina in 1776. He fought at the Battle of King’s Mountain and the Battle of Guilford Courthouse on the Patriot side and rose to the rank of major.

After the Revolution, Franklin served in the state legislature, representing both Wilkes and Surry Counties before serving a single term in the U.S. House of Representatives and two terms in the Senate. In 1816, Franklin became part of a commission, with David Meriwether and Andrew Jackson, to negotiate settlements with the Cherokee and Chickasaw.

By the time he was elected governor in 1820, Franklin was 60-years-old, overweight and in declining health. Despite his health issues, Franklin carried out his duties conscientiously and with his characteristic simplicity and practicality. He is perhaps best known for reforming the state’s penal code and advocating the settlement of the state’s borders.

Franklin declined to run for a second term and returned to his Surry County home where he remained until his death in 1823.

Battle of Elizabethtown Culminated at the Tory Hole

On August 27, 1781, the Revolutionary War Battle of Elizabethtown was fought.

The day before the battle, a local resident named Sallie Salter entered the Tory camp to sell eggs. Unbeknownst to them, she was a Patriot spy. She reported to Colonels Thomas Robeson, Jr., and Thomas Brown, commanders of a band of Bladen County militiamen that had withdrawn to Duplin County. Her information led to a decision to attack Slingsby.

This was a considerable gamble, as the Patriot command numbered between 60 and 70 men, while Slingsby’s forces totaled between 300 and 400.

After a night march, the militiamen launched a surprise attack on Slingsby’s camp. The resulting confusion was amplified by the successful efforts of the Whigs to make the Tories think that there were far more Patriots present than there actually were.

With Slingsby dead, the Tories retreated to a ravine, afterwards called “Tory Hole.” There they were fired upon until they surrendered. The Patriot victory permanently weakened Tory power in the Cape Fear region.

Stage Set for War in Hillsborough, 1775

A note of currency issued under the authority of the Third Provincial Congress. Image from Carolana.

Samuel Johnston of Edenton was selected to preside, and the body declared itself the province’s temporary government and created the Provincial Council to conduct business when the Provincial Congress was not in session and to oversee the Committee of Safety.

For the purpose of organizing a militia and arranging representation in the Provincial Council, the congress determined that the six existing judicial districts would become military districts. The districts contained between four and eight counties and were named for the most prominent towns they contained:  Edenton, Halifax, Hillsborough, New Bern, Wilmington and Salisbury.

Each military district was authorized to establish a regiment of minutemen that was to serve within the boundaries of North Carolina. Furthermore, each of the 35 counties was asked to raise a company of militia.

The Third Provincial Congress ordered the enlistment of the first two units of Provincial Troops to join the Continental Army later that year.

On August 2, 1781, British forces clashed with the North Carolina Militia near Wilmington in a skirmish now known as the Battle of Rockfish.

In the months following his January 1781 capture of Wilmington, British Major James Craig issued a proclamation threatening the loss of life and property to all who would not swear loyalty to English King George III. When the period for taking the oath expired largely unheeded, Craig began to devastate the territory around Wilmington.

On August 2, his troops found their path through Duplin County blocked by a Militia force under the command of former state governor Richard Caswell and Thomas Kenan. The militiamen were posted behind breastworks bordering the bank of Rockfish Creek.

A skirmish ensued, ending when the militiamen ran out of ammunition and were forced to withdraw under a barrage from the British artillery. Casualties were slight, with perhaps 60 militiamen killed and another 30 captured.

Craig continued his marauding and recruited 300 Tories. His local success was negated by the surrender of the main British force in the South under Lord Cornwallis at Yorktown, Virginia, on October 19.

A portrait of Gates from the Metropolitan Museum of Art.

On July 25, 1780, Major General Horatio Gates assumed direct command of the American forces in the Southern Military Department at their campsite on the Deep River in Randolph County.

Born in 1727 or 1728 in England, Gates served in the British army before settling in the colonies. In 1775, he volunteered for the Continental Army and served as a staff officer before receiving field command.

In September and October 1777, Gates commanded an army that defeated a British invasion from Canada at Saratoga, New York. The victory led to a military alliance with France and propelled Gates to the forefront of American military heroes. His ascendance was accompanied by controversy, due to his ambitions and his reputation as an overly cautious commander.

Influenced by faulty intelligence indicating an opportunity for a quick victory, Gates embarked on a campaign in South Carolina along a route lacking in food to support his army. On August 16, his exhausted and underfed army was routed by the British at Camden, South Carolina.

Nathaniel Greene was soon selected to replace Gates. He never received another field command. He retired from the army in 1784 and died in New York City in 1806.

This Day in North Carolina History
Blog at WordPress.com.