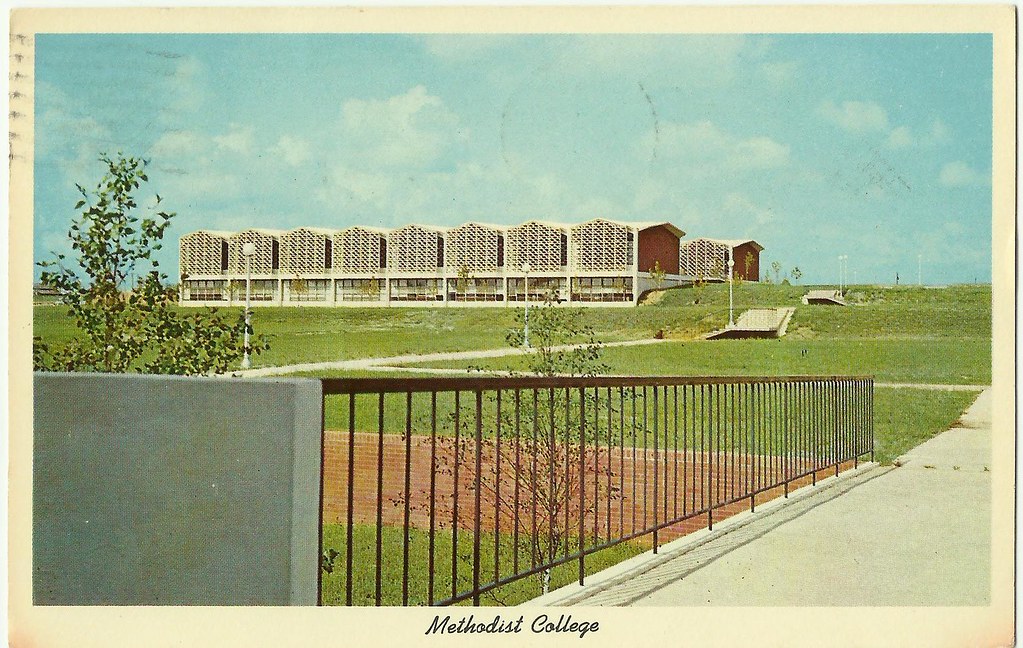 An early postcard of Methodist College. Image from the State Archives.

On September 16, 1960, the first class of 88 students was admitted to Methodist College.

About five years earlier, citizens of Fayetteville offered the Methodist Church a 600-acre tract and $2 million to establish a school in their town. Fayetteville attorney and future governor Terry Sanford was elected the first chairman of the board of trustees and L. Stacy Weaver was chosen as the first president.

When it first opened, the campus included a grouping of contemporary buildings; the architectural plan, created by Stevens and Wilkinson of Atlanta, earned a national citation for creativity and unity of design.

The school’s first major expansion came in 1978, when it began offering two-year associate’s degrees in addition to four-year bachelor’s degrees.

In 1993, trustees recommended that the college borrow funds to build additional residence halls over the next five years to accommodate 300 new resident students. The trustees further recommended that the college undertake a major capital campaign of at least $10 million for increasing the endowment and constructing a library addition, and two new academic buildings.

In 2001, the school had a record enrollment, and inaugurated the first graduate program, which trains physician assistants.

In 2006, trustees voted to change the name of the school from Methodist College to Methodist University. A newspaper headline announcing the vote.

On September 8, 1956, voters approved a set of education initiatives known as the Pearsall Plan by a wide margin.

The initiatives had been proposed by an advisory committee on education tasked by Governors William Umstead and Luther Hodges to respond to the Supreme Court’s 1954 Brown v. Board of Education decision on school segregation.

The committee concluded that integration “should not be attempted” since there was not enough support for it statewide and recommended that the power for assigning students to schools be moved to the local level.

Two other components in the bill allowed residents to call for a referendum on whether their local schools should be integrated and pledged the state to pay private school tuition for students unhappy with their assignment.

Though the plan was opposed by civil rights advocates for blocking court-mandated integration and by ardent segregationists for not doing enough to prevent it, it passed by a wide margin. Most of the components were never invoked and it was ultimately struck down as unconstitutional by a federal court after a 1966 challenge by renowned civil rights attorney Julius Chambers.

Image from the State Archives.

On August 27, 1868, David Lowry Swain, president of the University of North Carolina and former governor, died at age 67. His death was the result of a buggy accident on August 11. Initially buried at his Chapel Hill home, he was later reinterred in Raleigh’s Oakwood Cemetery.

A native of Buncombe County, Swain became recognized as an advocate for western interests, internal improvements and progressive government. The General Assembly elected him to his first term as governor in 1832.

Swain called for the constitutional convention which met in Raleigh in July 1835, and to him, more than anyone else, belongs the credit for the accomplishments of that meeting, including crucial reforms in the methods of representation and the election of governors by popular vote.

In 1835, Swain was elected UNC president and won the respect of both students and faculty for his administrative ability, personality and integrity. Though the state experienced severe hardships during the Civil War, Swain managed to keep the university open.

As Sherman’s army approached Raleigh in the spring of 1865, Swain played a role in surrendering the state capital and in securing assurances that the university would not be harmed.

Old Claremont and Education in Hickory

An 1898 sketch of Claremont College. Image from the State Library.

On August 25, 1880, North Carolina granted a charter to Claremont Female College in Hickory. The school, founded by the Evangelical and Reformed Church, started in an old church building. It was modeled after Wellesley College in Massachusetts.

Classes began in September with 21 students. Work was completed on a series of college buildings three years later. Following the resignation of Claremont’s first president, the school suffered financially until the trustees leased the college to William H. Sanborn, president of nearby Davenport College. He resigned after four years.

From 1892 to 1907, the college operated with moderate success, attracting students chiefly from North Carolina, but also from across the South. The trustees, tired of leasing the college to individual presidents, offered the college to the North Carolina Classis of the Reformed Church. Under the Classis, the school was renamed Claremont College.

Claremont operated until 1917, when money troubles caused the school to close indefinitely. Representatives from Horner Military School in Charlotte considered buying the property, but the deal fell through.

Claremont’s board of trustees dissolved the charter in 1937.  Higher learning continues at the site, as the location for Catawba Valley High School, now operating as Hickory Career and Arts Magnet.

An early view of the Cullowhee School. Image from the Hunter Library at WCU.

On August 5, 1889, Cullowhee Academy, a private school that was the predecessor of Western Carolina University, opened with an enrollment of 18. The school quickly prospered and closed the year with 100 students.

The school’s second principal, Robert Lee Madison, was a strong proponent of teacher education and proposed that the General Assembly give money to an existing high school in each congressional district so that a normal school could be opened to train prospective teachers. The legislators chose only to fund Cullowhee, giving $1,500 to Madison to get the program started.

Although not fully funded at the time, Madison’s idea, called the “Cullowhee Experiment,” became the model for the state’s regional colleges.

R. L. Madison. Image from the Hunter Library at WCU.

Improvements to the campus were funded by the legislature in 1901, and the school’s name was changed to Cullowhee Normal and Industrial School in 1905. It began operating as a junior college in 1913, while continued growth facilitated the transition to a four-year college in 1925.

The college gained university status in 1967 adopting its ultimate name, Western Carolina University. Today is serves more than 10,000 students in a diverse array of graduate and undergraduate programs.

The School of the Arts, Pride of Winston-Salem and North Carolina

William Ball leads a drama class at NCSA, circa 1965.-66 Photo courtesy of the University of North Carolina School of the Arts Archives.

On June 21, 1963, what’s now the UNC School of Arts (UNCSA) was chartered by the General Assembly as the nation’s first public arts conservatory.

The idea for the school—known until 2008 as the North Carolina School of the Arts (NCSA)—came from then Governor Terry Sanford and Asheville-born author John Ehle.

In addition to providing a $325,000 appropriation, the 1963 legislation established an advisory board of nationally-renowned artists to select a site for the school. The board sought a community that would be engaged with the school, and the citizens of Winston-Salem responded by raising more than $850,000 for the new institution in a two-day phone drive.

The original sign used for NCSA at the Chapel Street entrance, circa 1965. Photo courtesy of the University of North Carolina School of the Arts Archives.

Today, UNCSA is one of the nation’s premier creative and performing arts conservatories offering programs across five disciplines—dance, design and production, drama, filmmaking and music.

For more, check out a guide to the school’s history, which features a timeline, important early documents and more on the UNCSA Archives website.

The Salem Academy and College campus in the 1880s. Image from the Forsyth County Public Library.

On May 16, 1804, Salem Academy opened the doors of its new dormitory, South Hall, to students and officially transitioned from a day school to a boarding school.

The Moravians had established the all-girls’ school in 1772 soon after the first women trekked 500 miles from Bethlehem, Pennsylvania, to join the community at Salem. One of their number, Elisabeth Oesterlein, became the first teacher at the school. The unmarried women of Salem, known as “single sisters,” governed the academy during this early period.

The Senior Study Parlor at Salem Academy and College, circa 1904. Image from Old Salem Museums and Gardens.

The Moravians believed women and other disenfranchised groups of the time deserved an education. As early as 1785, records indicate the inclusion of African-American students, and in the 1820s, the daughter of a Cherokee chief attended the school.

Salem Academy and College both remain all-female, though some continuing education programs for men over age 23 are offered. The American Council on Education recognizes Salem College as the oldest such institution strictly for women in the United States.

This Day in North Carolina History
Blog at WordPress.com.