Image from the State Archives.

On August 27, 1868, David Lowry Swain, president of the University of North Carolina and former governor, died at age 67. His death was the result of a buggy accident on August 11. Initially buried at his Chapel Hill home, he was later reinterred in Raleigh’s Oakwood Cemetery.

A native of Buncombe County, Swain became recognized as an advocate for western interests, internal improvements and progressive government. The General Assembly elected him to his first term as governor in 1832.

Swain called for the constitutional convention which met in Raleigh in July 1835, and to him, more than anyone else, belongs the credit for the accomplishments of that meeting, including crucial reforms in the methods of representation and the election of governors by popular vote.

In 1835, Swain was elected UNC president and won the respect of both students and faculty for his administrative ability, personality and integrity. Though the state experienced severe hardships during the Civil War, Swain managed to keep the university open.

As Sherman’s army approached Raleigh in the spring of 1865, Swain played a role in surrendering the state capital and in securing assurances that the university would not be harmed.

On August 11, 1854, Governor Robert B. Glenn was born in Rockingham County.

After being educated at Davidson College and Richmond Hill Law School, Glenn practiced law in Rockingham and Stokes Counties. His entry into politics came in 1880 when he was elected to a single term in the General Assembly, representing Stokes County.

In 1885, Glenn moved his law practice to Forsyth County and served as U.S. attorney for the western district of North Carolina before returning to politics as a state senator in 1899. While in the General Assembly the second time, he spoke widely on behalf of white supremacy and supported the successful efforts in the legislature to disfranchise black voters.

Glenn ran against the Democratic machine in the 1904 gubernatorial primary for that party and went on  to win the general election by a wide margin.

Glenn focused his term in office on expanding public education and on increasing funding for hospitals, public health and care of the insane. He successfully spearheadeda campaign to ban the sale and manufacture of liquor, the “crowning act of my administration,” in his words.

After leaving office, Glenn returned to his law practice in Winston-Salem and served on an international boundary dispute commission. He died in 1920.

The North Carolina Fund headquarters in Durham, circa 1968. Image from UNC-Chapel Hill Libraries.

On July 18, 1963, Governor Terry Sanford announced the establishment of the North Carolina Fund, an interracial antipoverty initiative that predated and anticipated President Lyndon B. Johnson’s “War on Poverty.”

Sanford laid out his course in a speech at N.C. A&T State University in April 1963, rejecting segregation and proclaiming, “We must move forward as one people, or we will not move forward at all.”

The governor and his aides, principally novelist John Ehle, crafted a plan, using nonprofit and federal monies, to promote objectives without legislative interference. Startup funds, in the amount of $2.5 million, came from Z. Smith Reynolds and Mary Reynolds Babcock Foundations. A boost came from the Ford Foundation, in the amount of $7 million.  Over the course of five years, federal funds totaling $7 million, were routed to the Fund.

George Esser directed the effort, with the assistance of hundreds of student volunteers. Headquarters were set up in a former auto dealership in Durham, but the focus was statewide and not entirely urban. Special focus went to four mountain counties, Watauga, Avery, Mitchell, and Yancey.

The project in time became a political target, and while the Fund did not succeed in eliminating poverty, its ideals inspired subsequent efforts and activists.

On July 7, 1861, Governor John Ellis died and Henry Toole Clark was elevated to fill the position.

Ellis, elected to the office in 1858 and 1860, was in command in April 1861 when President Abraham Lincoln requested troops to put down the insurrection. After telling the president “You can get no troops from North Carolina,” Ellis ordered state troops to seize all federal forts and the Fayetteville arsenal and sent a telegram to Confederate President Jefferson Davis indicating that the state would support the Confederacy.

Shortly after North Carolina seceded from the Union, Ellis succumbed to tuberculosis.

Clark was elected to the state senate in 1850 and was returned in every election through 1860. His high character and strong moral values commanded the respect of both parties, and he was elected president of the senate in 1858 and 1860.

When Ellis became seriously ill in June of 1861, it fell upon Clark, as president of the senate, to assume the duties of the chief executive. His position was made official by the death of Ellis on July 7.

From Old Capitol Prison to U.S. Capitol: Zebulon B. Vance

On July 5, 1865, ex-Confederate Governor Zebulon Baird Vance was paroled on his honor after imprisonment at the Old Capitol Prison in Washington, D.C.

However, Vance returned to Greensboro after agreeing to have no further obligations to the Confederacy.

After relinquishing his ties to the Confederacy, Vance contacted Union General John Schofield and offered to surrender himself. Schofield declined to arrest him, saying he had no orders to do so. Vance informed Schofield that he would return to his home in Statesville.

Vance’s stay in Statesville was short-lived. He on May 4 only to be arrested on the orders of General Ulysses S. Grant on May 13. By May 20, he was in Washington.

While he was imprisoned, his wife’s health, usually fragile, took a bad turn. Provisional Governor W.W. Holden sent a telegram on July 4 noting her ill health and asking for Vance’s release.

After the war, Vance practiced law in Charlotte. By terms of the Fourteenth Amendment he was prevented from taking the U.S. Senate seat to which he was elected in 1870, but he worked behind the scenes to develop the Conservative party until he was eligible for office in 1872.

Elected governor again in 1876, Vance vacated that office with two years left in his term in 1879 to join the U.S. Senate. He would serve there until his death in 1894. 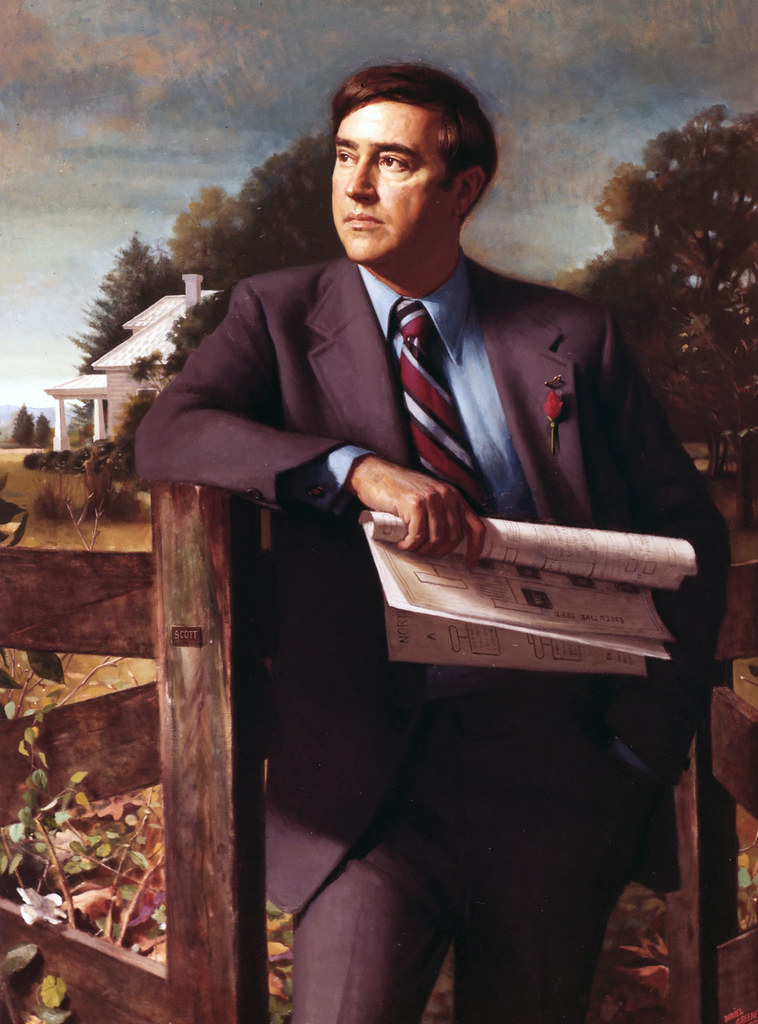 On June 13, 1929, Governor Robert W. Scott was born in Alamance County to family active in the state’s political and social life.

After attending school at Duke and N.C. State, Scott returned home to manage his family’s dairy farm. He served in the Army’s Counter Intelligence Corps in Asia before being elected the state’s lieutenant governor in 1964.

Elected to the state’s top job in 1968, Scott became the second governor in North Carolina history (after Richard Dobbs Spaight, Jr.) to follow his father into office.

Scott’s signature achievement was a reorganization of state government and a realignment of the state’s system of higher education. He consolidated more than 300 state agencies and offices into 17 cabinet-level departments and centralized the state’s public universities in one system.

At the close of his term as governor, Scott became vice president of the N. C. Agribusiness Council. He went on to co-chair the Appalachian Regional Commission, to unsuccessfully challenge Governor James B. Hunt, Jr. in the Democratic primary for governor in 1980 and to serve as president of the state’s community college system.

Scott’s governorship marked the end of a 72-year Democratic monopoly on the office.

A map of North Carolina and the surrounding areas from the time period. Image from UNC-Chapel Hill Libraries.

On June 2, 1690, John Gibbs issued a declaration claiming his right to the governorship of Carolina and called on the people to obey him. Gibbs proclaimed himself chief executive of the colony, basing his claim on the Fundamental Constitutions, when Governor Seth Sothel was banished earlier that year.

Despite that, Philip Ludwell arrived in the colony in the spring of 1690 with a governor’s commission from the Lords Proprietors, on whose authority North Carolina was colonized. Ludwell set up his government, but Gibbs was determined not to give up the governorship. Gibbs referred to Ludwell as a “rascal, impostor and usurper” and said that he would fight anyone to keep Ludwell from the governor’s office.

The next month Gibbs and some supporters entered the Pasquotank precinct court and broke it up. Gibbs forbade the holding of a court without first receiving a commission from him. The force seized two magistrates, took them as prisoners and held them captive on Gibbs’s Virginia plantation.

Upon hearing of this, the Albemarle council–that’s the government backed by Ludwell–sent the militia to stop this rebellion. However, the militia refused to enter Virginia without permission from that colony’s government.

Gibbs and Ludwell both went to England to make their claims before the Lords Proprietors. The proprietors upheld Ludwell’s commission.

This Day in North Carolina History
Create a free website or blog at WordPress.com.